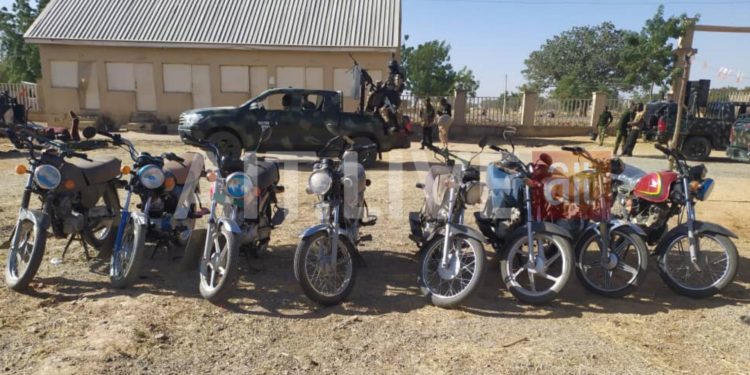 In a statement by the Acting Information Officer of the Operation, Captain Abayomi Oni- Orisan, 8 of the bandits including one female were arrested during the operation.

The statement says the troops conducted clearance operations, ambushes and fighting patrols in several locations across the theatre.

The operation resulted in the interception of a large ammunition cache of 4, 630 rounds of 7.62 mm.

The troops of Operation Hadari Daji also intercepted suspected drugs counterfeiters and drug dealers with 350 cartons of fake ‘‘PECOL’’ drugs and a sizeable consignment of suspected Indian hemp in Zurmi and Shinkafi Local Government Areas of the State.

The Fake ”PECOL” drugs which were being smuggled from Niger Republic through Jibia, were carefully concealed behind bags of fresh pepper.

The statement further says all the suspects and exhibits have been duly handed over to the National Agency for Food and Drugs Administration and Control, NAFDAC and the National Drug Law Enforcement Agency, NDLEA for prosecution and destruction of the drugs.

The Force Commander of Operation Hadari Daji and Acting GOC 8 Division of the Nigerian Army Sokoto, Brigadier-General Aminu Bande reassured the people of Zamfara and the other neighboring states of their safety.