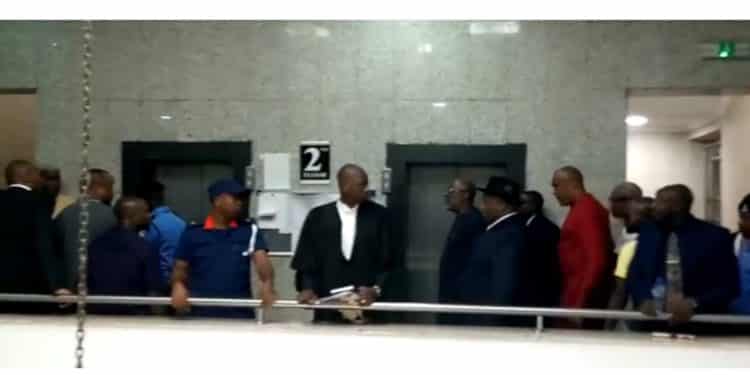 The Federal High Court in Abuja has sentenced the former Publicity Secretary of the Peoples Democratic Party, PDP, Olisa Metuh to 7 years imprisonment for the offence of money laundering to the tune of N400m which he allegedly received fraudulently from the Office of the National Security Adviser, NSA in 2015.

Justice Okon Abang made the pronouncement after he convicted Metuh on all the 7-count charge leveled against him.

The trial of the former PDP spokesman and his company, Destra Investment Limited started 4 years ago when Metuh was arrested by operatives of the Economic and Financial Crimes Commission, EFCC.

He was tried on 7 counts charge of money laundering on allegations he fraudulently took the sum of N400m from the Office of the National Security Adviser which was said to be monies earmarked for arms deal.

Metuh was also accused of moving the sum of $2m million without due process.

In the trial, several documents were tendered, witnesses called and rulings were made on applications.

ln one of the testimonies, Metuh said the former Board of Trustees Chairman of the PDP, the late Tony Anenih was one of the recipients of payments from the N400 million he received from former NSA, Sambo Dasuki.

Even in the cause of his trial, Metuh slumped as he made his way to the dock on May 21, 2018 and subsequently judgement was fixed.

While delivering judgement on Tuesday on the first count, Justice Abang held that Metuh took possession of the N400 million from the Office of the NSA without contractual agreement.

Immediately the judgement was handed down Metuh sought to use the toilet and was accompanied by sympathizers.

On the second count, which bordered on the criminal conversion of N400 million, Justice Abang said apart from the fact that the money was used to fund activities of the PDP, Metuh also used the money to acquire a property at Banana Island in Lagos, an act contrary to the e-payment mandate which stated that the money was meant for security services, whereas Dextra Investment was not a registered security outfit.

Justice Abang insisted that the evidence pointed to the fact that the money was deliberately laundered to brighten the chances of the PDP during the general elections in 2015.

And on the transfer of N50 million traced to the joint account of Metuh and his wife, there was no proper explanation therefore it is clear that there was conversion.

On counts three and four which bordered on concealment of funds and illegal disbursement, Justice Abang says the e-payment mandate showed that the money was released for security services but was concealed and used for PDP campaign activities and personal use.

But the judge wondered why only the former NSA and top officials of the PDP attended the meeting, yet Metuh claimed the money was disbursed for special national assignment.

Justice Abang, therefore, held that the N400 million was never released for a special national assignment based on the evidence before him.

On counts 5 and 6 which deal with making cash transactions above the statutory threshold of N5 million for individuals and N10 million for corporate bodies, he said that the defendants committed the offence by handing over raw cash of $2 million dollars to a non-registered bureau de change operator to change same into Naira.

On the 7th count, the trial judge held that the transfer of N27.7 million to Anthony Anenih for a special national assignment directly represented the illicit nature of the fund.

The court therefore found Metuh guilty of all 7-count charge brought against him.

In an allocutus, the defence counsel, Abel Oziokwu and Tochukwu Onwugbufor both for Metuh and Dextra Investments respectively pleaded with the court for linency.

Justice Abang therefore sentenced Metuh to 7 years imprisonment on count 1, 2 and 7; count 3 is 5 years; count 4 is 5 years while counts 5 and 6 are 3 years each. However, all sentences will run concurrently.