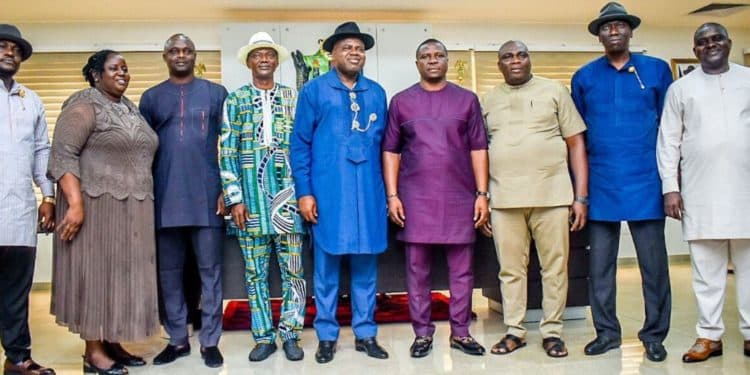 For a peaceful, united, and prosperous Bayelsa State, the executive, legislature, and judiciary must synergise to ensure the state stands tall among the states in Nigeria.

This was the message of Governor Douye Diri when he received members of the State House of Assembly at the Government House Yenagoa, on Monday.

The members of State House of Assembly came to congratulate him on his inauguration and also assure him of their total support.

Bayelsa Assembly shuts down for 2 weeks over Coronavirus

It is his first working day in office after his inauguration as the 5th Executive Governor of Bayelsa State on February 14.

Members of the 6th Bayelsa State House of Assembly are the first to pay an official visit on Governor Douye Diri and his deputy, Lawrence Ewhrudjakpo.

Governor Diri was pleased to receive his visitors. He called for collaboration in Project Bayelsa stressing that his position is to serve the interest of all the citizens of the state.

The Bayelsa State Governor also felt worried about the delay in the passage of the state’s 2020 budget.

The Bayelsa State House of Assembly is made up 19 members from the Peoples Democratic Party and five from the All Progressives Congress, totalling 24 legislators.