The South-South Governors Forum in a meeting in Asaba, the Delta State capital resolved to endorse the establishment of a regional security outfit for the six states.

Governor Okowa of Delta State and chairman of South-South Governors forum who read the communique on behalf of the governors said the modalities of the outfit will be spelt out in no distant time.

One after another their flights landed at the Asaba airport where the governors boarded their various vehicles en-route government house Asaba venue of the meeting.

After brainstorming for over 2 hours, the forum endorsed the establishment of the regional security outfit for the zone and agreed to resuscitate the ailing braced commission conceived by previous governors of the six states of the zone for their collective development.

Other decisions taken include the need for full implementation of the 13% derivation fund by the Federal Government and for President Muhammadu Buhari to reconstitute the governing board of the Niger Delta Development Commission, NDDC.

The forum also considered regional attack on Lassa fever and Corona Virus with an instruction on various South-South health commissioners to urgently brainstorm to tackle the menace collectively. 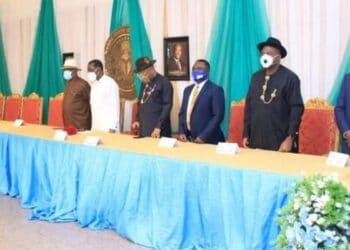